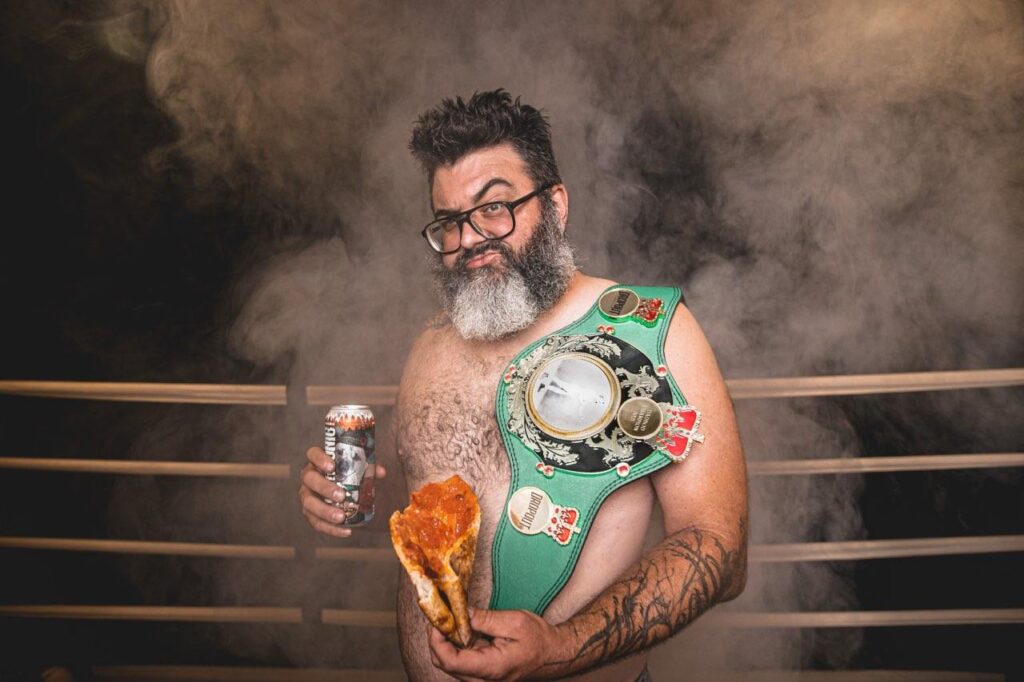 Brandon Minga is a multidisciplinary artist practicing professionally for 16
years. He is currently the creator and a resident artist of the House of RAD
(Resident Artist Doers). In addition to his own practice, Brandon owns
and operates a small agency, the Mingadigm specializing in branding,
identities, interiors, murals, sculpture and commissioned art.

Brandon attended the Milwaukee Institute of Art and Design where
he received his bachelor’s degree in Fine Art Illustration, 2004. Since
graduating, he has spoken on alumni panels and has taught as a guest
instructor at MIAD. His work with students motivated Brandon to volunteer
as a mentor to underprivileged teens through Hanson Dodge’s On-Ramp
MKE program. Those interactions have inspired his love for making art that
engages people of all ages and backgrounds.

Brandon’s artwork reaches the public through a variety of channels, with
emphasis on community-minded projects – and while the majority of his
work has been primarily exhibited throughout Southeastern Wisconsin, it
has been showcased nationally and internationally as well. Locally, he
has been elected to complete a 27’x15’ 3D mixed-media mural for the
Black Cat Alley public art space and has been a two-time finalist in the
Pfister Hotel Artist and Residency program. Brandon’s impact at the new
Fiserv Forum was two-fold – not only was he chosen, along with 31 other
artists, to create a mixed-media triptych art piece for the Milwaukee Bucks
Collection, but his work was also debuting at the Candy Lab store where
he created all of the wall, floor, and lollipop graphics. Live art events have
also played a big part in Brandon’s career. He has enjoyed creating live
for no-nprofits such as the Feeding America annual benefit Feed Your Soul.
Notably, He created the “Together Feathers,” sculpture for the Uptown
Crossing’s Pocket Park that is received the 2020 Mayor’s Design Award. He
also created a 15’ tall sculptural interpretation of a jellyfish that stands in
downtown Green Bay, WI. The “Salva-Jelly,” is solar powered with 300 LEDs
and lights up at dusk everyday. One of Brandon’s most important projects
is with America’s Black Holocaust Museum where he has created and art
directed all of the graphics from production, through print and installation.
He is also the co-founder of the artist community the House of RAD
(Resident Artist Doers) where in this space he currently runs the Mingadigm
and his studio practice.