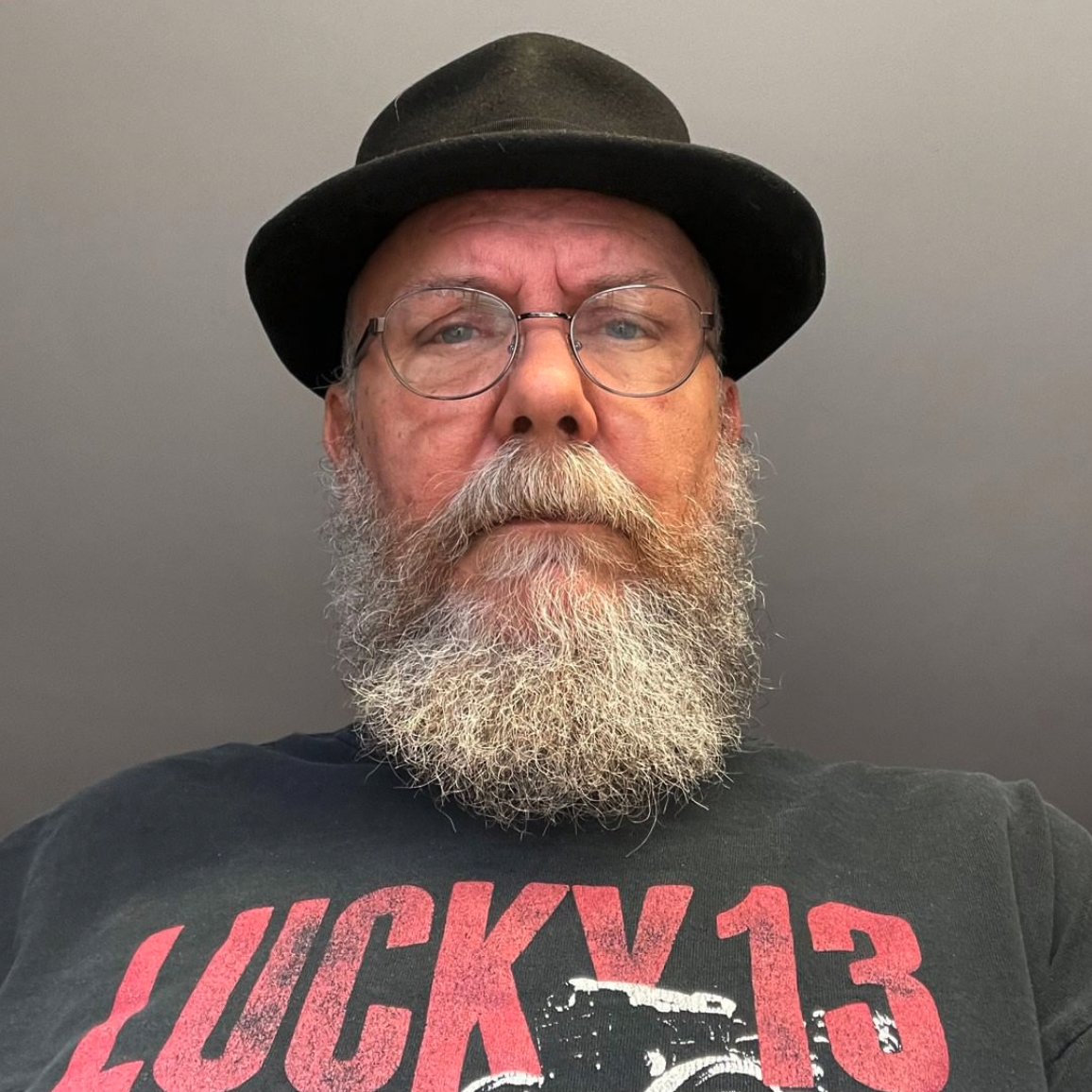 Gregory Martens (b. 1959 Milwaukee WI, USA) grew up in the rural lake town of Muskego WI. His father was a salesman, bus driver, and avid Fundamentalist Christian. His mother was a factory worker, gardener, and craftswoman. Throughout his childhood he traveled back and forth from the country to the city to visit his Grandmother and uncles and discovered early Mad Magazines, which he tried to copy. As a young teen, Martens was attracted to the art section at the library where he discovered the “Northern Line” of Bosch, Brueghel, Schongauer, and especially Durer. In the 1970’s Martens found his place in the Milwaukee counterculture when he stumbled upon the Underground Comix of Robert Crumb, Rick Griffin, Victor Moscoso, Art Spiegelman, and Robert Williams. “I saw tremendous similarities among all those “Black-Line” artists and wondered if they were all somehow influenced by the European Masters.”

Gregory met Sharon, the love of his life, in college, they dropped out, got married, and raised a family of three. After many years as a traveling salesman, Martens purchased a shoe repair business and became a cobbler in Wauwatosa WI. His whole family helped fix the shoes in their very busy little shop. After ten years as a cobbler, at age 46, Martens was unexpectedly stricken with a very aggressive case of Bone Marrow Cancer: Multiple Myeloma. Many surgeries ensued, two autologous bone marrow transplants, months in the hospital, and financial ruin; but against all odds, he recovered from the cancer and went into remission.

Physically unable able to fix shoes, Martens went back to finish college as an Art Major at The University of Wisconsin-Milwaukee. It seemed like the harder he worked as an art student, the more he recovered. He finished his BFA and stayed on to finish grad school, he received his MFA in Printmaking in 2012. Martens now divides his time working as a part-time Art Professor teaching printmaking at the University of Wisconsin-Milwaukee and working in his studio.

“My work in grad school was about the Apocalypse, surviving cancer, and trauma narratives, it actually made several people cry. Recently, I found a way to channel my teenage years when I would turn up the 8-track stereo and just draw pictures all night just for the fun of it. So, I began again to draw hot rods, devils, skeletons, monsters, and other low-brow, blue-collar stuff, and now it makes people smile.”

Martens has had four solo art exhibitions and has been in group shows across the country as well as international shows in Harbin, China and Valencia, Spain. His work is in museum collections and private collections in the USA, Lima, Cuzco, and Puerto Moldonado Peru, and Beijing and Harbin, China. He is the author of two books: The Sketchbook of Gregory Martens, Waterhouse Press, Milwaukee 2017, and No Time Like the Present: The Art of Gregory Martens, UWM Press 2014.

Martens is committed to the Printmaking community, as a student in 2008 he founded the Print Club at UW-Milwaukee. He was on the Steering Committee when Southern Graphics Council International held their annual conference in Milwaukee in 2013. He is currently Board Treasurer with the non-profit community printshop Anchor Press, Paper, & Print in their new Milwaukee home. In 2022 Martens founded the Milwaukee Printmakers Alliance to help build community among artists and printmakers. He is currently a Resident Artist at the House of RAD in Milwaukee.